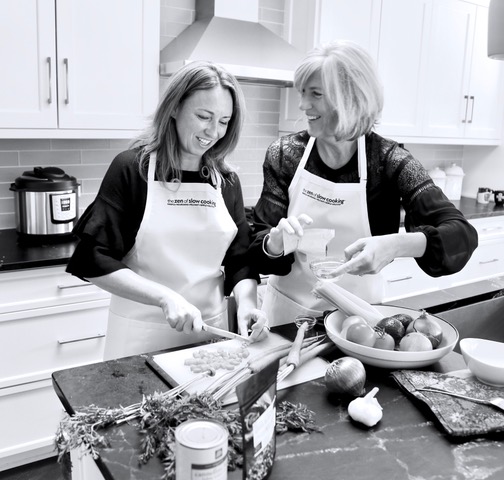 This week’s Meet a Mom feature is spicy! Meg Barnhart is the Founder/Co-Creator of the Zen of Slow Cooking food blog maker of gourmet spice blends specifically crafted for your Insta Pot, slow cooker or Dutch Oven. The Lake Forest mom of 3 children shares her story of how it took eight years of food blogging, spice blending and many trials and errors, to perfect delicious spice blends made for the pickiest of eaters – spice blends that are now sold in Whole Foods Market, Sunset and nationally in Cost Plus World Market, as well as select Walmart stores. Mic drop. Welcome, Meg!

My name is Meg Barnhart, Founder/Co-Creator of the Zen of Slow Cooking. I was born in Chicago, grew-up in Kenilworth and currently live in Lake Forest Illinois. We moved to Lake Forest in 2003 when my children were little, so they could grow up near their grandparents.

How many kiddos do you have and how old are they? 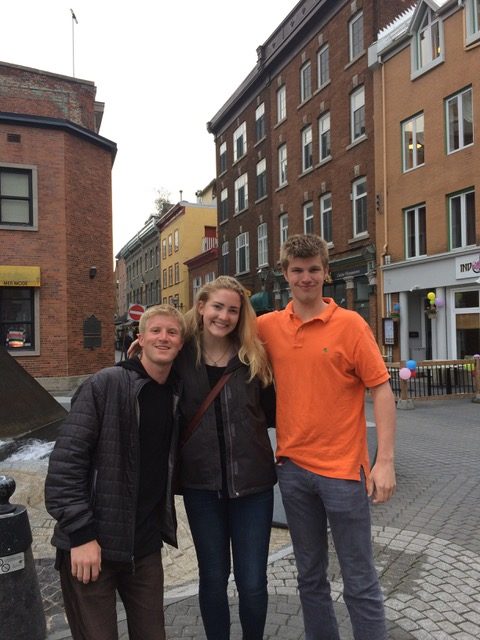 I love drinking Manhattans in the winter and I did not grow-up with a Crock Pot!

I love sharing our story!

The soul of the Zen of Slow Cooking lies in our desire to bring people together over the shared meal and our heart is providing employment for adults with developmental disabilities.

My mother was a fabulous home cook – the kind of cook who experimented in the kitchen and shopped organic way before it was fashionable. Our evening dinners were long as my father loved history and we had wonderful conversations around the dinner table. My childhood had a very Zen-like end to my day

Given my childhood experience, I always assumed that if I was fortunate to be a stay-at-home mom, that I would recreate that memory. So, it was a huge disappointment, when I found my own dinner hour so hectic and chaotic.

As with many families today, my children were going in different directions and I was trying to hold it all together. The other challenge I faced was with my middle child. He had a complex speech and language disorder and didn’t have functional language until he was 4 years old. Those early school years were tough.

In a moment of desperation, I went to see my oldest and dearest friend, Kate.

Kate has been by my side since we met in fourth grade and as a first-grade teacher, I considered her an expert in all things relating to children. I was willing to do whatever she suggested. As I shared my story with “and I can’t even get dinner on the table.” She said, “I want you to do three things.”

I took out a piece of paper.

“Think of yourself as June Cleaver (Leave it to Beaver aka: the perfect Mom),” she said. I laughed. “No, seriously, June knew where she stood in the world. You’re a great Mom and you have to start believing in yourself again.”

“Next, don’t answer the phone after 3 pm. You are way too accessible.”

“And finally,” she said, “buy yourself a Crock Pot.”

I got the first two but not her third piece of advice. She told me that it was a great small appliance and I could get my meal started in the morning and have dinner ready by early evening.

With these instructions in hand, I went to bed peacefully. I had a plan. The next morning, I went through my cabinets and found a Crock Pot® that I received at my wedding shower 19 years ago. Still in its box. I looked inside and realized it was too small to prepare enough food for a family of five. Undaunted and on a mission, with a quick trip to the store for a larger slow cooker and a book titled 5 Ingredients or Less, set me on my path.

As my slow cooking journey began, I soon discovered the Zen-like effect slow cooking had on my family. The delicious aroma that filled the air, the freedom it allowed all of us in the afternoons. We started taking long walks with our dog before starting homework and we all felt more relaxed during the afternoon shuffle. I also used my morning slow cooking prep time as a space for reflection and meditation as I chopped my vegetables in silence.

This became the foundation for Zen of Slow Cooking.

The bubble burst after two years as I was pulling out my slow cooker, my then 9-year-old daughter, Lucy, with tears in her eyes said, “Mommy, I don’t want to eat any more thick meat.”

My heart sank, but I knew she was right because I only knew how to make a few things in my slow cooker.

I wasn’t ready to give up my newfound treasure, so I pulled out some of my favorite cookbooks and started to transform our meals into contemporary cuisine. The idea for Zen of Slow Cooking came from those early days, but it didn’t become a reality until I met my business partner Jane McKay. 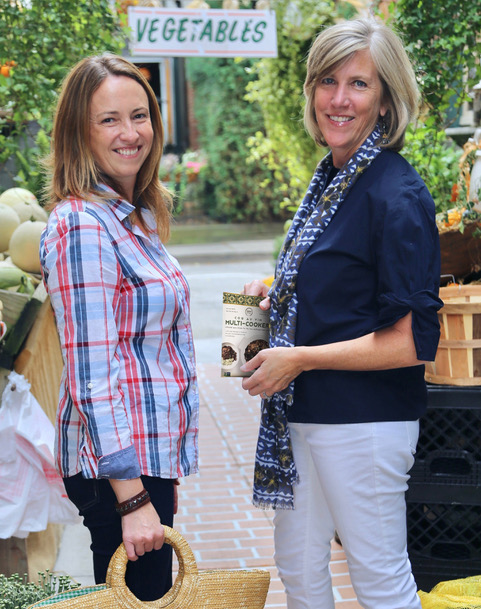 In 2010, I spent a year studying what life/employment could look like for my son when he was older. I found so little consciously created employment for adults with learning challenges that I decided to create a business for him. As I shared this dream with a friend, I told her I knew this is what I was meant to do with my life but I wasn’t sure where to begin. She asked me a simple question, “What makes you happy?” I shared my love of slow cooking and she said do something with that.

I knew I needed someone to help me with the culinary side of the business and a friend introduced me to Jane. Jane had just moved from the UK and was doing some food writing and recipe testing for a friend who was writing her first cookbook. I shared my vision and asked if she would join me in co-creating this dream and to my absolute pleasure, she agreed.

Our partnership was literally written on the back of a napkin.

We started the Zen of Slow Cooking food blog in 2012. Using our most widely searched recipes we created a line (three in those days) of globally inspired, gluten-free spice blends to serve as a flavor foundation for a meal made in the slow cooker. We brought them to our local Farmer’s Market and to our delight sold-out our opening day.

In 2014 with so many people interested in selling our blends to their friends, we opened our online business. We also began a Planet Access Company (PAC) to help with the fulfillment of our spices. PAC provides training and employment for adults with developmental disabilities. We began with 4 people helping us pack blends and now have over 30 people who help with fulfillment.

Eight years after our first blog post, I am happy to say that we have won awards for the quality of our blends as well as for our business model. We are part of the conscious capitalism movement committed to creating a sustainable and inclusive economy by becoming a Certified B Corp in 2017. In 2020, received our Women Owned Business Certification.

Today, you can find us locally in Whole Foods Market, Sunset and nationally in Cost Plus World Market, as well as select Walmart stores. We’re also available www.thezenofslowcooking.com. 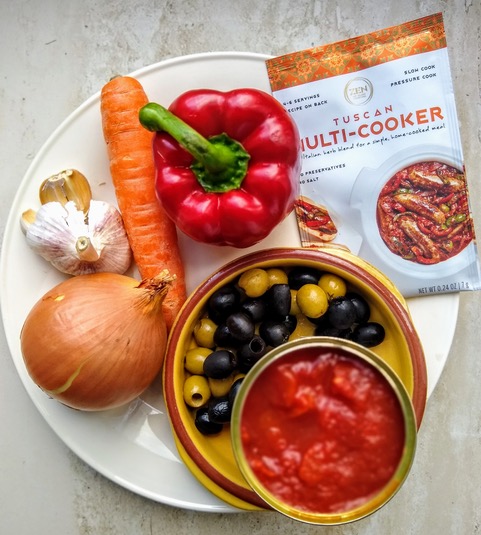 That is a great example of perseverance and persistence! Do you have any podcasts, apps, Insta handles that help in your everyday life?

I carve out 5-20 minutes each day to sit in silence and am a fan of Dan Harris -10 percent Happier App. I also make sure to work out each day whether it’s walking my dog or taking a yoga to refresh my mind and body.

Who are your influencers and/or mentors that have helped you get to where you are today and/or continue to inspire you.

Absolutely — my parents. They were both committed to serving in a variety of ways. My father was the “town” family doctor so our home was a place, where people came to be comforted and heard. My mother was gorgeous, bright, bold and fearless. She was active and participatory in everything she did; she ran her first political campaign, when I was four years old. My parents were role models for leading lives with integrity, kindness, humility and generosity. They encouraged me and my siblings to do our best and empowered all of us to take risks. From their perspective, living enthusiastically, taking personal responsibility, being kind and considerate, and telling the truth always trumped getting good grades in school.

I also have to say that my business partner is not only a dear friend and champion of our company, but her tireless devotion to our business and our partnership has been inspiring.

When you’re not cooking with your amazing spices blends, what are your favorite local takeout restaurants?

So many… I love Longitud315 and Miramar Bistro (in Highwood.) In Lake Forest, Sushi Kushi (every Friday!), Deer Path Inn, Market House, Francesca’s and The Gallery. 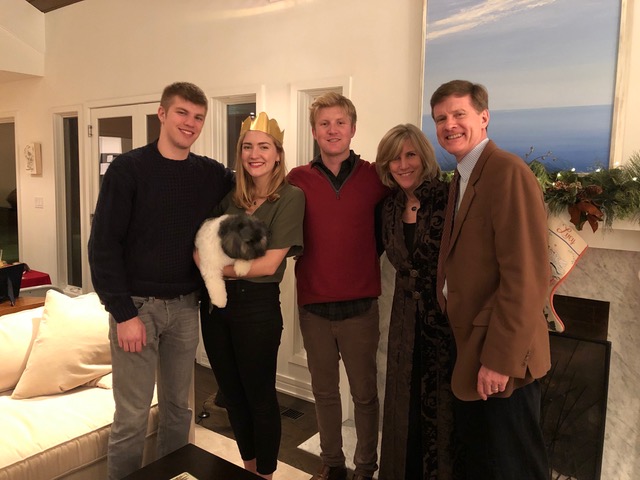 What advice can you give other mamas out there who are looking to pivot their career right now, start up a new company, etc.

I would say spend a lot of time considering the “Why” rather than the “How.” Why do you want to start your own business or change careers not how do you plan to start your business. When you have a clear intention of what you want to create or do, all the pieces will fall into place. If anyone wants to talk in more detail, I would be happy to connect meg@thzenofslowcooking.com. I’ve been fortunate to have so many people lend me a helping hand and listening ear over the years.

What’s on the horizon for Zen of Slow Cooking?

It’s a super exciting time! We are launching in 250+ Cost Plus World Market stores later this month, debuting a yoga/cooking series this Fall and created a Holiday “B the Change” gift box featuring our spices and another Women Owned Certified B Corp – Prosperity Candle. With each sale, we’ll be making a donation to the North Lawndale Employment Network in Chicago.

We’d love to gift a little Zen for every order from Chicago North Shore Moms shoppers! We’ll include a free Smoky BBQ blend so a Mom can gift another Mom some spices. At the time of your purchase on Zen of Slow Cooking, simply add “free Smoky BBQ for CNSM” in the notes section of your cart and we’ll be sure to include that in your cart. 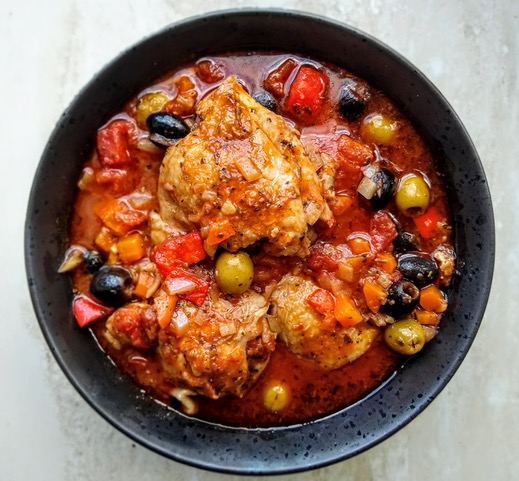 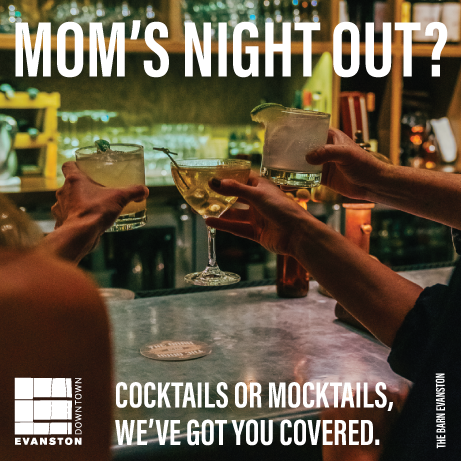