City to the Burbs by way of a Pandemic

When looking for a few favorite photos from 2020 I became sidetracked & taken aback by how much this country has gone through in a short 10 months. It’s been a crazy, heartbreaking & bizarre experience since March.  You know how it’s easy to forget that timeframe when a new baby never sleeps because you’re just going through the motions, the same thing kind of happened to us with what the city was like for a long 6 months- until I looked through it all again. 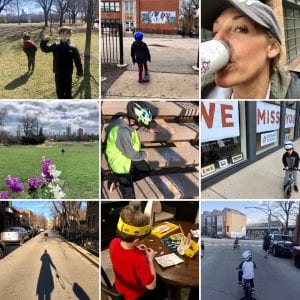 My family & I lived in Chicago until the end of August, in Lincoln Park bordering Old Town.  While everyone across the world has felt the impact of this pandemic, I feel like we had a birds eye view for how hard the cities were hit.  I’ve always taken loads of photos (it drives my family crazy), so to no surprise I have hundreds from those first “Wild West” weeks when we thought we would be back to “normal” by summer, to the unrest that shortly followed and of the months of closures that seemed to never end.

This is in no way meant to be political, we simply found it to be interesting & wanted to share because Chicago has a special place in many of our hearts.  At only 15-20 miles away, it felt like a world away the first time we visited the North Shore last summer.  While we are all pandemic fatigued here as well, I have to say that we’re incredibly fortunate to have even something as simple as the lakefront to gaze at or parks to go to without chains holding the gates shut.  We weren’t even able to use the sidewalks on the east side of lakeshore drive in the city this summer- imagine that.  When I say not a glimpse of the lake, I mean glimpse. 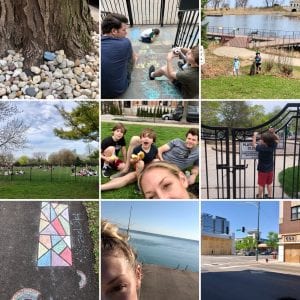 Imagine closing an entire city, and leaving millions without green space or the lakefront- because that’s just what happened in March.  I absolutely agree that gathering needed to halt and doors shut, but when that many people live in buildings without yards, they need somewhere to go- or they go a little crazy.

Not only were the parks chained shut, but there were fences everywhere you looked, police guarding the areas and people crammed on sidewalks or walking down normally busy streets to attempt to distance. Grabbing to-go drinks from restaurant stands while trying to find an empty space to chalk, kick a ball or scooter became the norm.  It felt like we were at Mardi Gras, only it wasn’t that much fun many days!  There were only a few areas of park space not fenced and they were PACKED 24/7. The lake front was closed through the entirety of the city for many months.  The beaches never opened.  For me, a walk by the lake was both my physical and mental health daily- for many in Chicago it’s the same.  Around May I was told that if you went before 6am, the bikers had usually torn the fence down in a few spots, which was the most exciting thing I’d heard all spring. So I left at the crack of dawn in search of a broken fence. The first time I got in, I didn’t realize the impact seeing the water would have.  I just sat staring out quietly with tears streaming thinking “what is happening, how can we go on like this?”. 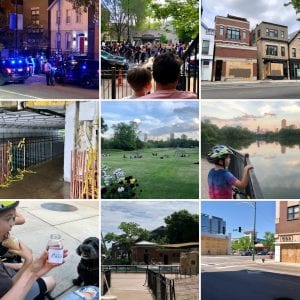 Then the unrest- while I was glad my kids were seeing this part of history and that we were able to take part in it, there were also unsettling things happening in front of our home almost daily. Shops & restaurants were smashed and boarded all around us, graffiti on our front steps & buildings surrounding, large protests past our door daily with police in full riot gear walking bye waving to our frightened kids became almost normal, and the sirens were nonstop. One day we were throwing a ball around a crowded Oz Park and group started setting off fireworks next to us, another day an Instagram post with “Burn the North Side Down” with an organized date started circulating.  In 15 years this was the first time I had felt unsafe living in the city. The location of our duplex was too close to so much chaos.  It was incredibly sad & I felt like I was giving up on Chicago, but it wasn’t going to work for another 6 months.  I also have to follow that with this- the vast majority of the protests were peaceful.  There was a lot of good going on along with the chaos.  Painted rocks, and crafted rainbows and balloons were everywhere.  The community came together in a way that I’d never seen in the city.  It was sad and startling at times, yet magical seeing the outpouring of support for each other, businesses and people in need.

After a particular crazy night, we started spending most weekends in Winnetka with our newly formed out of necessity “bubble family”.   We ended up buying beach passes, joined LifeTime Fitness in Northbrook, enjoyed the bike trails and parks, and life felt very normal on the weekends.  It was night and day to the city.  Eventually, we decided the time had come to make the visits permanent and we moved- and life became easier.  Truly. 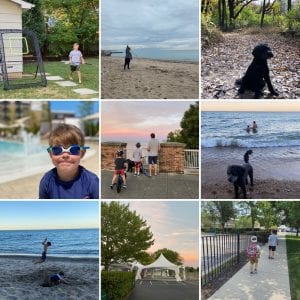 So that’s it- a little glimpse at what much of 2020 felt like for city dwellers across America.  Sitting with our still only “bubble family” over NYE & looking through photos I found it to be so interesting comparing the differences in the area through the year.  I told them as we were leaving that they saved us mentally last summer by opening their home when the city was literally burning- and it couldn’t be more true.  It in no way takes away from what any of us individually experienced through the pandemic, but maybe offers positive perspective when you feel like these closure will never end.  We are so fortunate to live in the North Shore with so much to offer.  Something as simple as looking out at the lake or walking through a park could be missing, and you don’t realize how precious these things are until they’re not available.

Here we go! Your weekend has been rounded up for F